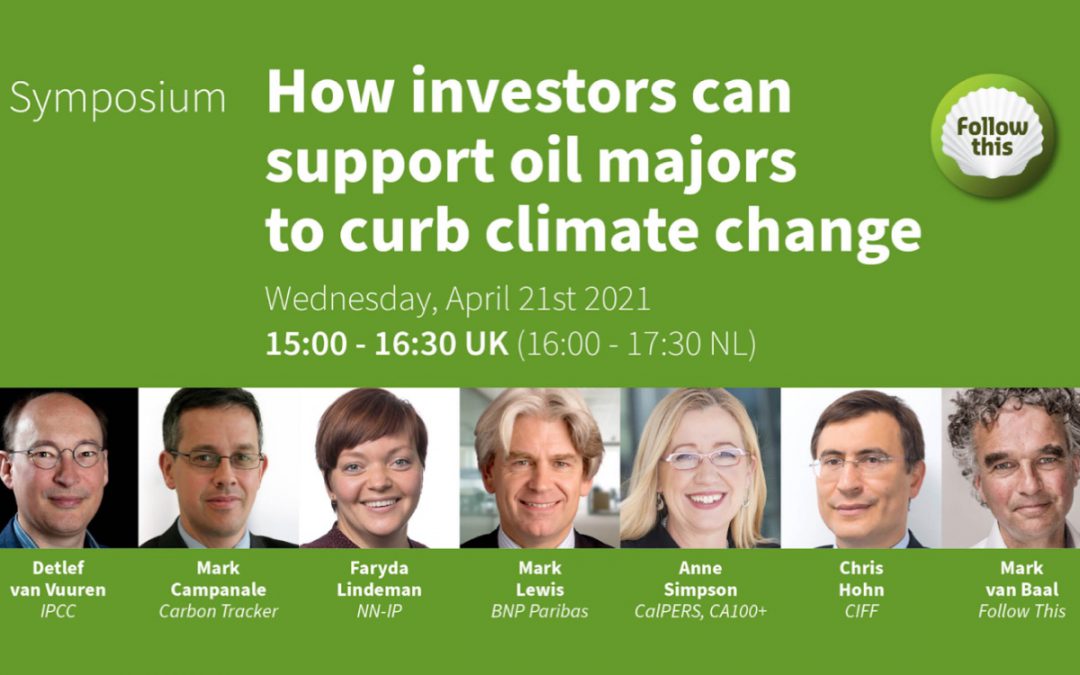 Oil majors urgently need to change course. Investors have the agency to compel them to do so by voting for climate resolutions. Watch the symposium here or read the key take-aways:

Speaker’s main points and quotes (and timing in the video):

Faryda Lindeman, NN-IP (27:06 to 38:02): “We are, in general, favourable to shareholder proposals on sustainability targets […] Voting has really quite an impact, companies are quite responsive to proxy voting. […] If you want to have a debate with a company, if you want companies to move in the right direction, it’s quite easy to vote against management.”

Mark Lewis, BNP Paribas (38:02 to 53:37): “The oil and gas industry will find itself in the exact same position that the utility industry found itself in 15 years ago, and I’m afraid we’re seeing the same signs of hesitancy and reluctance to radically reshape the business model.”

“Most of the executives in large oil and gas companies around the world today are industry veterans, they have been in this industry for 30-35 years, they’ve made it to the top, and all of their experience has been based on a time when oil had no competition. So it’s very difficult for people who’ve grown up with the rules of the game in a certain framework all of a sudden to find that the rules of the game are being upended very violently by a new competitor that they didn’t see come and which, frankly, they don’t yet understand how it operates.”

Anne Simpson, Director for CalPERS and chair of Climate Action 100+ (53:37 to 01:10:42) explained why CalPERS voted for climate resolutions in Europe: “The question about voting is a simple one: it’s the point in which you move from talk to action.”

These votes in Europe have driven change at Shell, BP, and Equinor. On the question of how CalPERS will vote on the three Follow This climate resolutions in the US, she answered by pointing to the CA100+ benchmark: “No company has taken the capex [investment] decisions that are needed, even a company like BP. Close to 60% of BP’s capex is simply not aligned with climate commitment. The gap between what is said and what needs to be done has to be closed.”

Hedge fund manager Chris Hohn, founder of TCI (The Children’s Investment) (01:10:42 to 01:29:03) urged fellow investors, such as BlackRock, to vote for Follow This climate resolutions and against the climate strategy of Shell. “Shareholders should support the resolutions proposed by Follow This and send a clear message that we must have targets. Five-year targets are key. Without near-term targets, we’re not going to get anywhere, we’ll have vague commitments that don’t do anything. Targets and a plan to back them up are fundamental to the change we need.”

“It’s obvious that shareholders should vote against Shell’s and Total’s proposed transition plans and against directors.”

“Talk doesn’t get you very far if you don’t have consequences to put some fear into companies. Votes at AGMs are a powerful tool to effect change.”

“It’s absolute greenwashing and hypocrisy to say ‘we’re supporting all this great stuff on climate’ and then support plans that don’t lead to any [CO2 emission] reductions.”

Hohn’s personal message to the big three (BlackRock, StateStreert, Vanguard): “You’re bullshtitting your investors to say you’re doing something and holding companies to account but then voting for plans that don’t do anything.”

“It’s absolute greenwashing and hypocrisy to say we’re supporting all this great stuff on climate and then support plans that don’t lead to any reductions.”

In the panel discussion (01:29:20 – 01:33:04) both Faryda Lindeman and Mark Campanale answered: “No” to the questions if any oil major has a Paris-consistent strategy yet, and “no” to  the question if they will move on their own accord. “They wouldn’t have even got as far as they have without a clear signal from the stock market and from votes in AGMs,” Mark Lewis added.

“Voting is a very important tool, along with engagement so we can explain to companies what we are trying to achieve. Divestment is an absolute last resort,” Faryda Lindeman said.