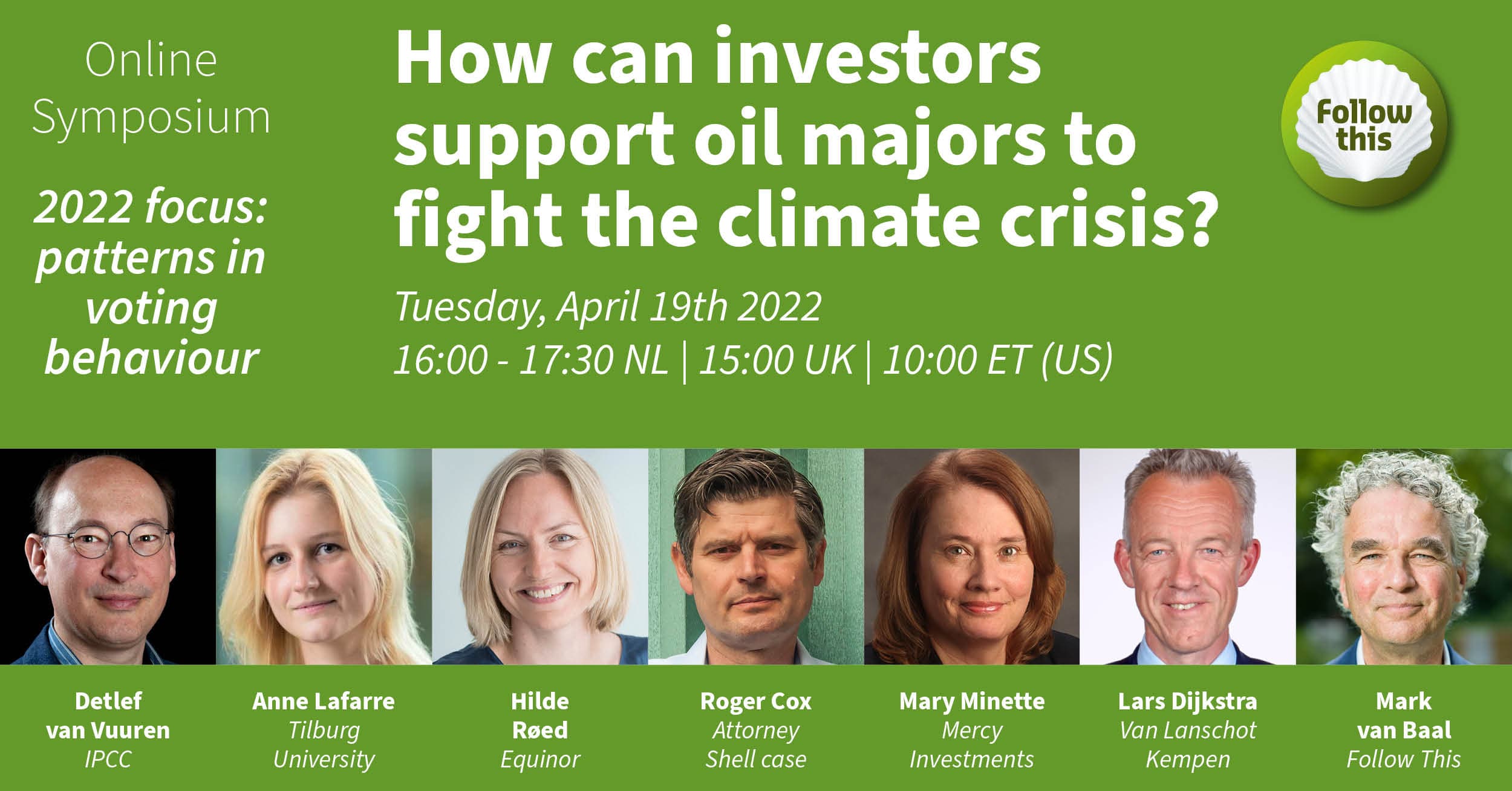 The Follow This Online Symposium 2022 will bring together investors, the oil and gas industry, academics, and media to discuss how investors can support oil and gas companies to take a leading role in tackling climate change.

Watch the 2 minute summary of the 2021 edition

Prepare for the oil majors’ next AGM season in 1.5 hours? Register now!

How can investors support oil majors to fight the climate crisis?

While the investor community is deciding what good climate commitment looks like from oil majors and how they will vote on crucial climate resolutions, Follow This will convene its yearly international investment symposium. The goal of the symposium is to discuss how shareholders can support oil and gas companies to contribute to the targets of the Paris Climate Agreement. Specifically, we will zoom in on patterns in voting behavior of big investors.

The symposium will bring together investors, the oil and gas industry, academics and media to discuss how investors can support oil and gas companies to take a leading role in tackling climate change.

Prepare for the oil majors’ next AGM season in 1.5 hours? Please register your attendance with [email protected] or via the registration form above.

Please extend this invitation to relevant colleagues in your network (or share the invitation via LinkedIn).
We look forward to seeing you on April 19.

We are pleased to announce the confirmed speakers:

We are currently discussing with an oil major and another investor about their participation in the event. An update will be sent when these are confirmed.

Please extend this invitation to relevant colleagues in your network (or share the invitation via LinkedIn).

We look forward to seeing you on April 19.

Detlef van Vuuren (1970) is a professor in Integrated Assessment of Global Environmental Change at the Faculty of Geosciences, Utrecht University. Detlef van Vuuren focuses on global sustainability issues. He develops models with which future climate and environmental changes can be explored by means of scenarios. He takes into account the interaction between climate, environment, living environment and economy. Within this field, his focus is, among others, on the relationship between climate change and trends in world energy use, climate policy and scenario development. Van Vuuren worked on the climate scenarios of the IPCC, the climate panel of the United Nations. He was a Lead Author of IPCC’s Fourth Assessment Report and is currently involved in the development of new IPCC scenarios for the Sixth Assessment Report of working group three.

Dr. Anne Lafarre is Associate Professor at the Private, Business and Labour Law at Tilburg Law School. She also teaches at the Jheronimus Academy of Data Science in ‘s-Hertogenbosch, and is the Program Director of a Joint Data Science Bachelor’s programme in Tilburg together with the Eindhoven University of Technology. She works mainly in the field of corporate governance, corporate sustainability, and shareholder engagement. At the moment, she is carrying out a four-year Veni research project on the role of (Dutch) institutional investors in corporate sustainability.

Roger Cox is author, climate expert and lawyer at the Maastricht law firm Paulussen Advocaten. His book “Revolution Justified” was the basis for various successes in national and international climate cases in which he is involved. Roger represented the Urgenda Foundation against the State of the Netherlands and is closely involved with the Belgian “Klimaatzaak” which won a climate case against the Belgian government in June 2021. Together with Milieudefensie Roger is working on a case against Shell, in which Shell is held accountable for its contribution to the climate problem and its legal obligation to take measures to limit climate damage. This case was won by Milieudefensie in the first instance and is currently on appeal. His work is considered groundbreaking. In 2021, Roger was named by Time Magazine as one of the 100 most influential people in the world. In 2022 he was awarded the Dresden International Peace Prize.

Mary Minette (Mercy Investment Services)
Mary Minette joined Mercy Investment Services in 2016. She manages Mercy’s shareholder engagement work on climate change and sustainability issues, including participation in the Climate Action 100+ initiative. Previously, Mary was director of environmental education and advocacy for the Evangelical Lutheran Church in America (ELCA) Washington Office. During that time, she served on the Climate Change Advisory Group for the ACT Alliance, as president of the board of Creation Justice Ministries and a member of the board and executive committee for the National Farm Worker Ministry. Prior to joining the ELCA, Mary worked for several environmental organizations, serving as vice president of Earth Day Network, legislative director for the League of Conservation Voters, and staff attorney with Audubon’s endangered species and trade and environment programs. She holds a Bachelor of Arts degree from Stanford University and a JD from the University of California, Los Angeles School of Law. She is a member of the bar in California and the District of Columbia.

Hilde Røed is Senior Vice President Climate & Sustainability at Equinor. She has long experience from working within climate and sustainability, including from DNB and the United Nations Development Programme. Hilde joined Equinor in 2012 and has been heading up work on climate strategy, risk and reporting – including implementing the TCFD Recommendations. Hilde holds a master’s degree in Society, Science and Technology from the University of Oslo.

Lars Dijkstra joined Kempen Capital Management in August 2005 as Chief Investment Officer. Since July 2021, he has exchanged this position for the role of Chief Sustainability Officer at Van Lanschot Kempen.

From 2005 to 2021 Lars was responsible for all Kempen funds and strategies as CIO of Kempen Capital Management. He was also chairman of the asset allocation committee and ESG Council.

Lars is a member and former chair of the 300 Club, an international group of CIO’s. Lars also serves as an external advisor on several investment committees of pension funds and family offices, including the investment committee of the Dutch Central Bank. As of April 2018, Lars has joined the Board of Eumedion. And as of January 2022, Lars has been appointed Chairman of the Board of Eumedion.

Mark van Baal is the founder of Follow This, a group of over 8,000 green shareholders that has become Big Oil’s biggest change agent. According to The Guardian “Follow This leads investor rebellions […] to tackle global heating”. Follow This forced five majors – Shell, Equinor, BP, Phillips 66, and Chevron – to reluctantly accept accountability for their product emissions (Scope 3). The ultimate mission of Follow This is that shareholders compel oil and gas companies to put their brains and billions behind renewable energy. Mark studied Mechanical Engineering in Delft, was a conscript navy officer, account manager and energy journalist before he founded Follow This in 2015. He lives in Amsterdam with his wife Marijke and their son Barend.