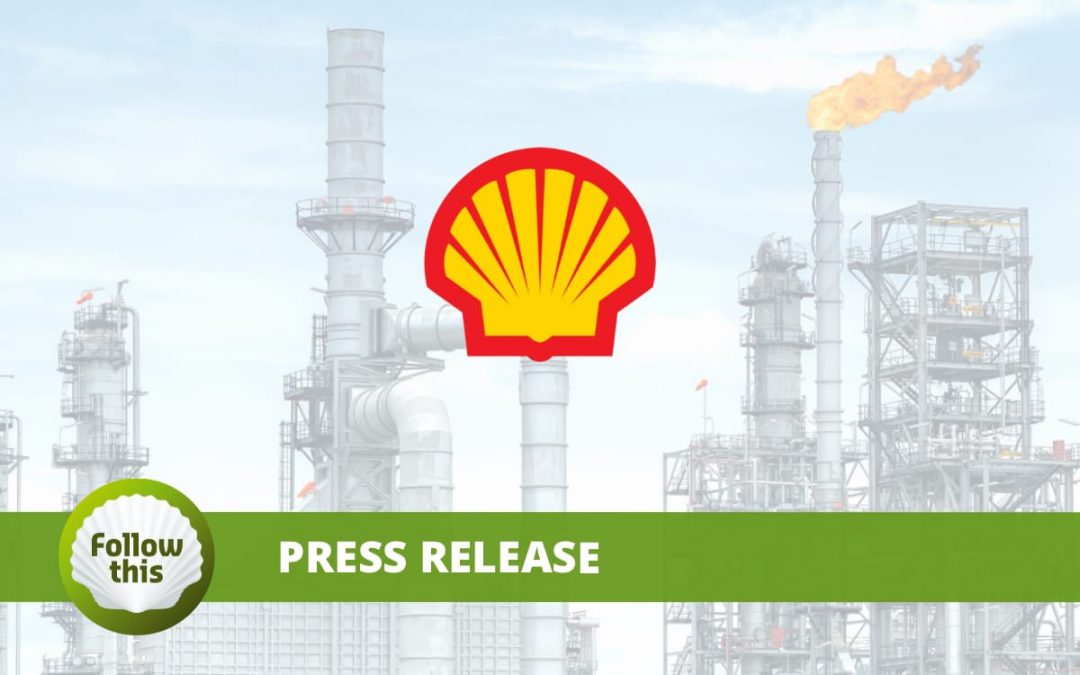 Energy crisis resulting from Ukraine war has eclipsed climate crisisInvestor support for Paris-consistent targets (resolution 21, filed by Follow This) decreases to 20% (down from 30% in 2021) at Shell’s annual general meeting (AGM) in London today. Votes against Shell’s own climate plan (resolution 20) doubled to 20% (up from 11% in 2021). The annual meeting in London was interrupted for several hours by massive climate protests, as reported by The Guardian.“Investors have given in to Shell’s narrative that the crisis created by the war in Ukraine overrides the climate crisis,” Follow This founder Mark van Baal responded.“Both crises must be dealt with simultaneously by shifting investments to renewables. The current windfall profits from high oil prices should be used to make the enormous investments in renewables that are needed to address the climate crisis and reduce dependency on oil and gas fields tied up in geo-political conflict.”“The hardships of the current energy crisis will be dwarfed by the consequences of devastating climate change.”“Today’s voting results are a loss in the fight against the climate crisis. Today, everybody loses except the board of Shell, who will hang on to fossil fuels investments for another year and continue to fuel the climate crisis with their outdated business model.”“We thank the investors that voted for a curb in emissions. They are the true change agents in the fossil fuel industry; an industry that has proven to be change-averse for decades but can make or break the Paris Accord.”“Together with these shareholders we must convince more shareholders that Big Oil will only change course when they vote as well.”Complicit“Investors who vote against Paris-consistent emission reductions should realize that they are complicit in Big Oil’s refusal to reduce emissions this decade and are therefore complicit if the world fails to meet the Paris goal.”Majority votes against court ruling“On top of that, with their votes against Paris-consistent emissions reductions, the investors in fact disagreed with the Dutch court ruling that demanded the same; a 45% reduction of absolute emissions by 2030.”Shell didn’t change its strategy“Both our climate resolution and Shell’s strategy remained the same since May – Shell’s current strategy is yet to lead to significant emission reductions this decade. Unfortunately, investor sentiment has shifted, likely as a result of the energy crisis and windfall profits brought on by the war in Ukraine.”Minorities drive change“In the past, even minority support from institutional investors has proven effective in advancing Big Oil’s climate targets”. In Europe, in 2017, Shell was the first oil major to reluctantly take accountability for Scope 3 after 6% voted for the Follow This climate resolution. In early 2020, BP followed suit after 8% in 2019.”A significant minority of shareholders rebel against Shell’s plan to increase emissionsDespite a decline in overall votes, a significant minority of shareholders continue to defy board advice and demand that Shell progresses its strategy by voting for the Follow This resolution. This includes eight out of the ten largest Dutch investors (see table below and at the top, eight pre-declared; Actiam divested, Robeco unknown. All votes depicted for 2022 are based on investors’ joint statement)“These votes show that a significant number of investors still want to see Paris-aligned emissions reduction targets; now is the time to amplify the voice of these investors who remain committed to the long-term interest of Shell and its shareholders.”“We thank these shareholders for keeping their eyes on the ball. Together, we will remind fellow shareholders what is at stake.”Insufficient climate targetsTo address the climate crisis and limit warming to 1.5°C, global emissions must come down by approximately 40%, state the IPCC and the IEA. In-depth research by Global Climate Insights (GCI) shows Shell will not reduce its emissions by 2030 (p. 18).“Shell’s target to reduce the net carbon intensity of its products [Scope 3] by 20% by 2030 will not deliver absolute emission reductions to achieve the Paris goals. Moreover, Shell doesn’t plan to shift investments substantially away from fossil fuels to renewables and plans to increase natural gas production.”Confusion created by in-house resolution“Votes against Shell’s own climate plan which remains inconsistent with the goals of Paris (resolution 20) doubled to 20% (up from 11%). This also signals growing discontent with Shell’s current strategy.”

“Generally, up to 99% of shareholders follow board voting advice on resolutions; this is evident in the results for the other management resolutions. Both the Follow This resolution and the in-house resolution contradict this trend, signaling discontent with Shell’s strategy and significant opposition to the current management.”

Other possible explanations for the decrease in votes:

2022 is lost, looking ahead to 2023“We have lost a precious year in the fight against climate change at Shell; a year in which the company will continue to increase emissions, with the consent of its shareholders. We have not succeeded in convincing investors of the importance of their votes in favor of Paris-alignment to prevent the devastating consequences of climate change. Together with likeminded investors and partners we will amplify our message that only voting will change Big Oil.”“We thank the investors who voted for the Follow This climate resolution and against Shell’s in-house resolution. They are the true change agents in the fossil fuel industry; an industry that has proven to be change-averse.”The new CA100+ lead investors at Shell (PGGM and MN) were two of the eight Dutch investors calling on fellow investors to vote FOR shareholder climate resolutions and AGAINST inhouse climate resolutions at Big Oil (in the statement, published in April).“Hopefully, change in leadership within investor alliance CA100+ will turn tides for the 2023 AGM.”The last Follow This Climate resolutions at Big Oil this AGM-season come to a vote tomorrow at Chevron and ExxonMobil. 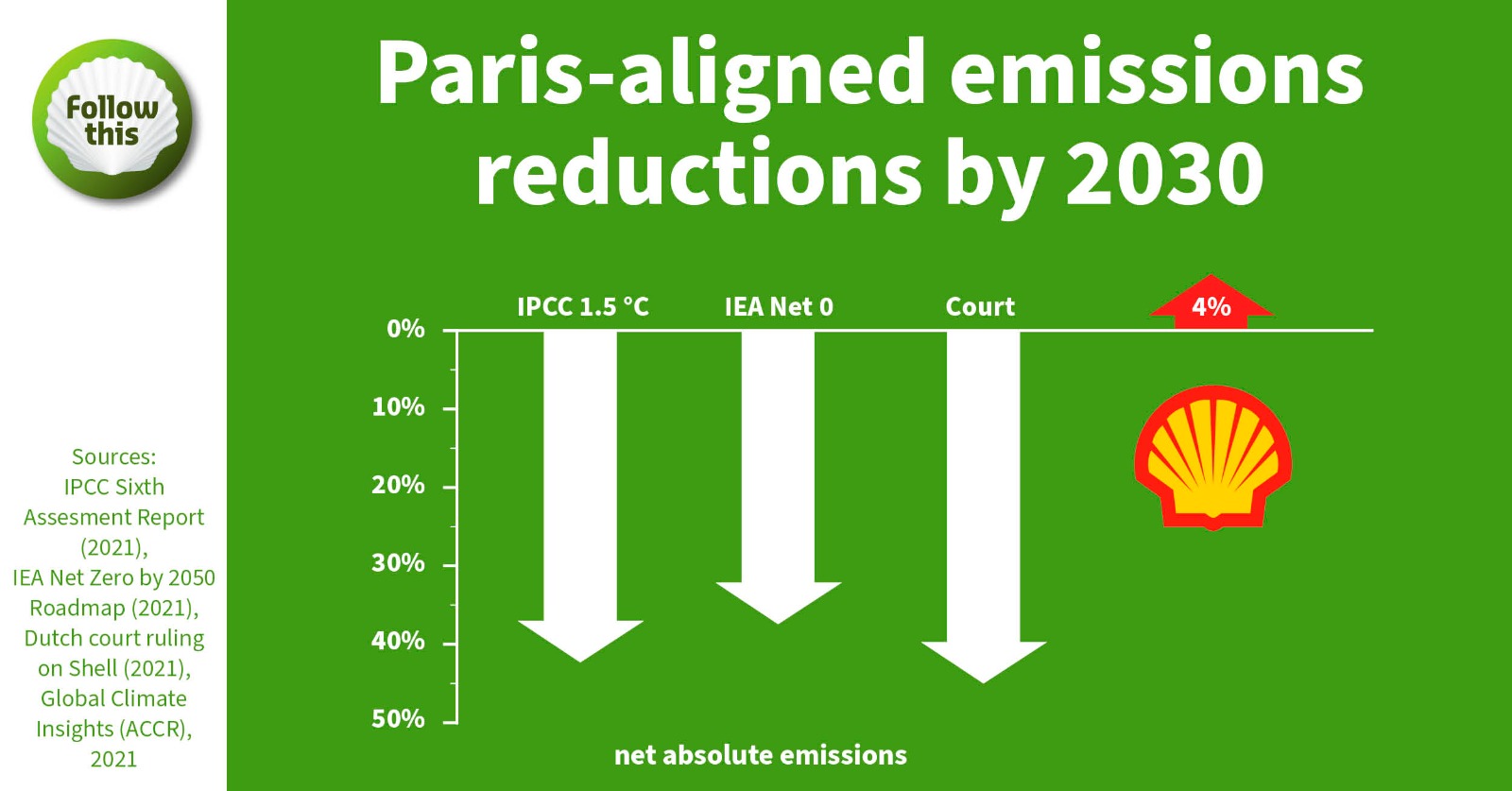 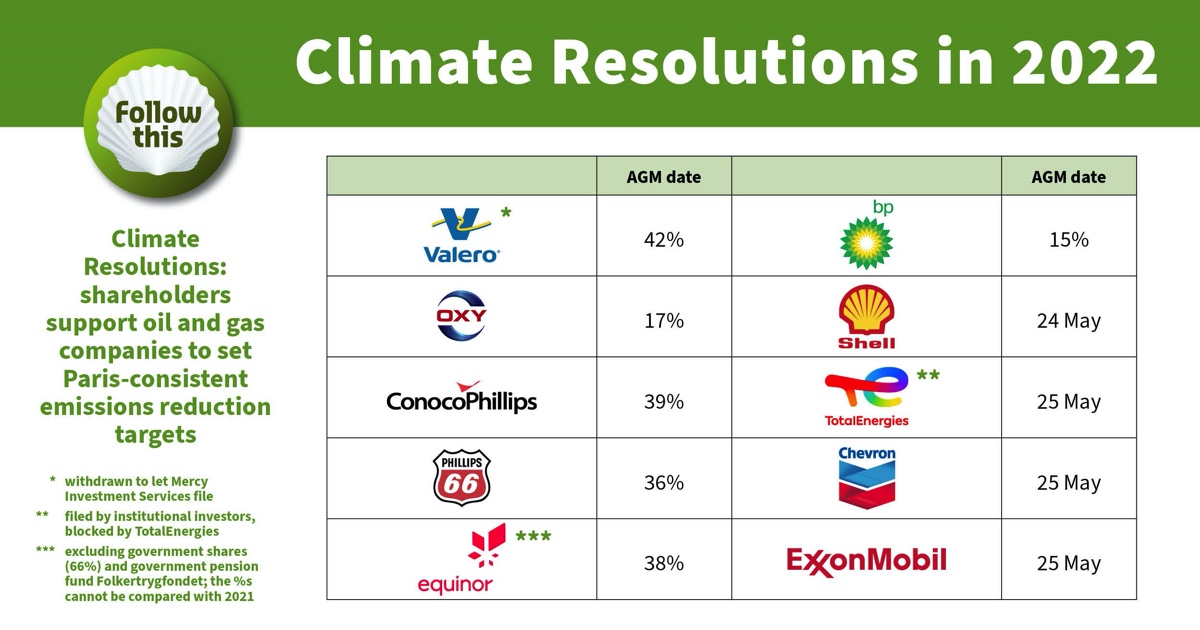 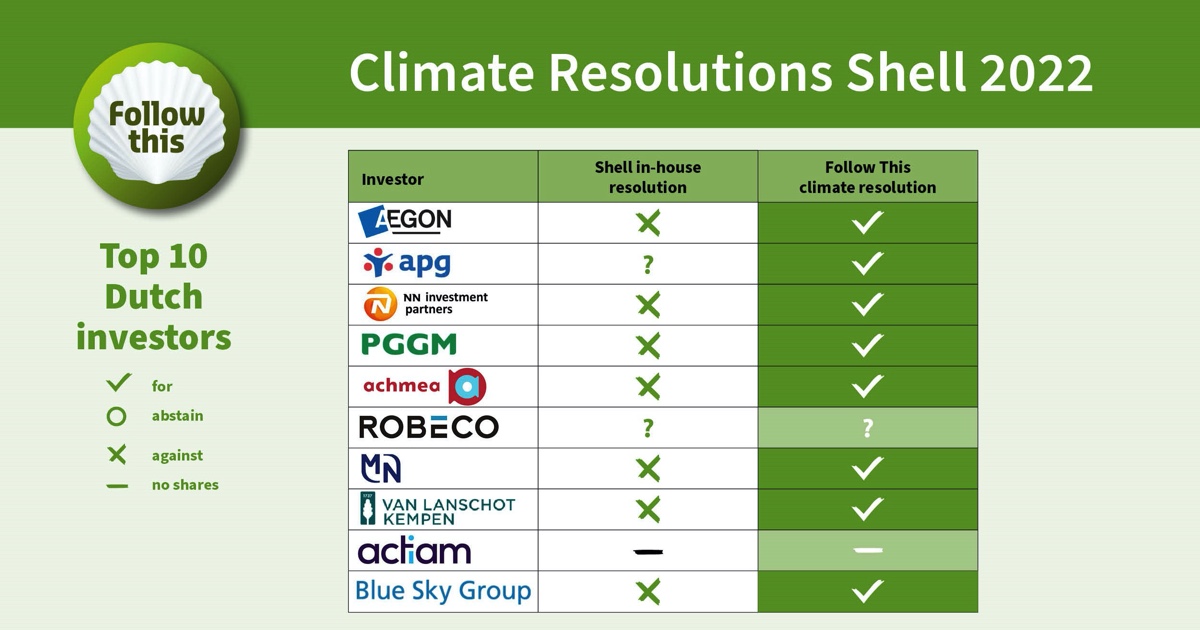 All votes are based on investors’ joint statement (also see APG’s statement of today) and have not yet been confirmed by the shareholders post-AGM. 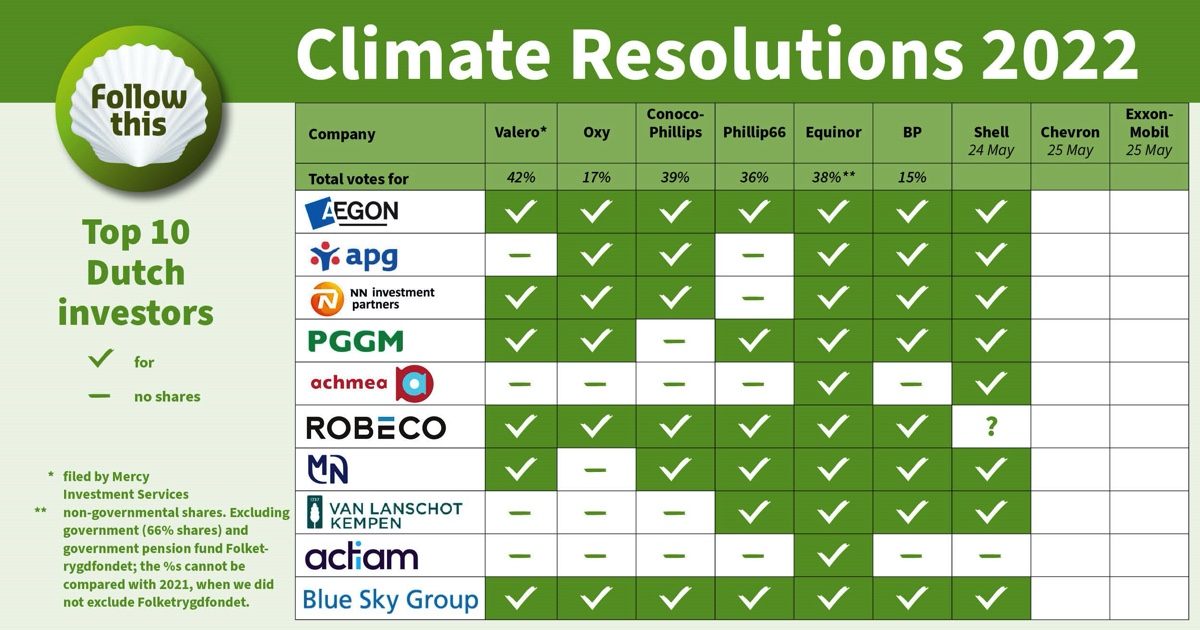 All votes depicted at Shell are based on investors’ joint statement (also see APG’s statement of today) and have not yet been confirmed by the shareholders post-AGM. 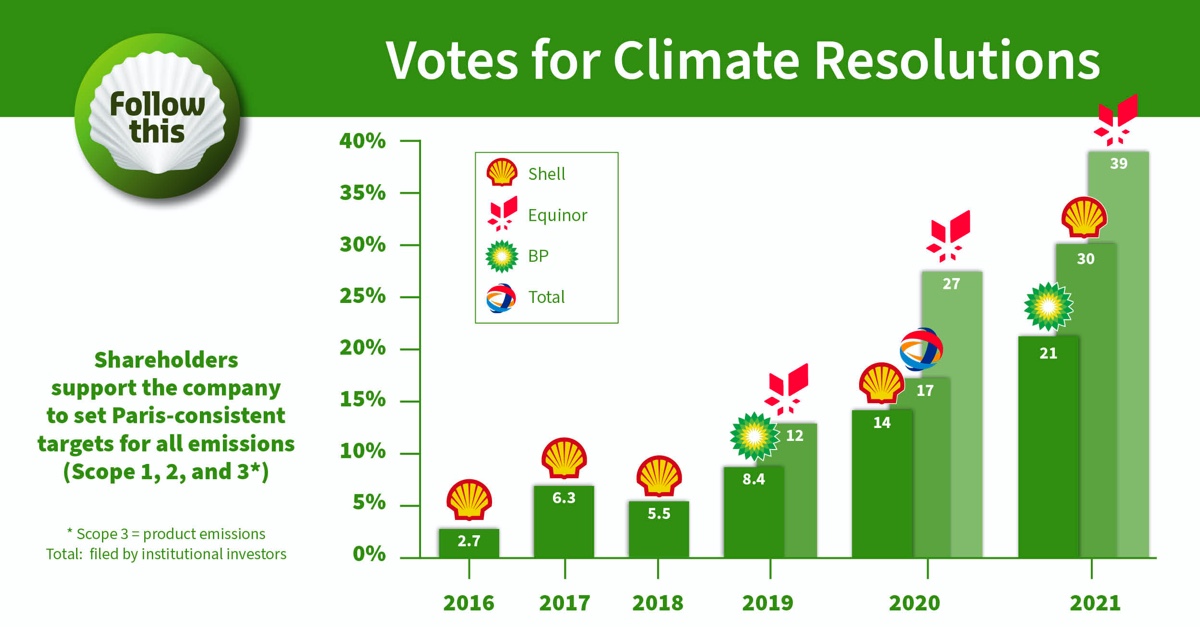