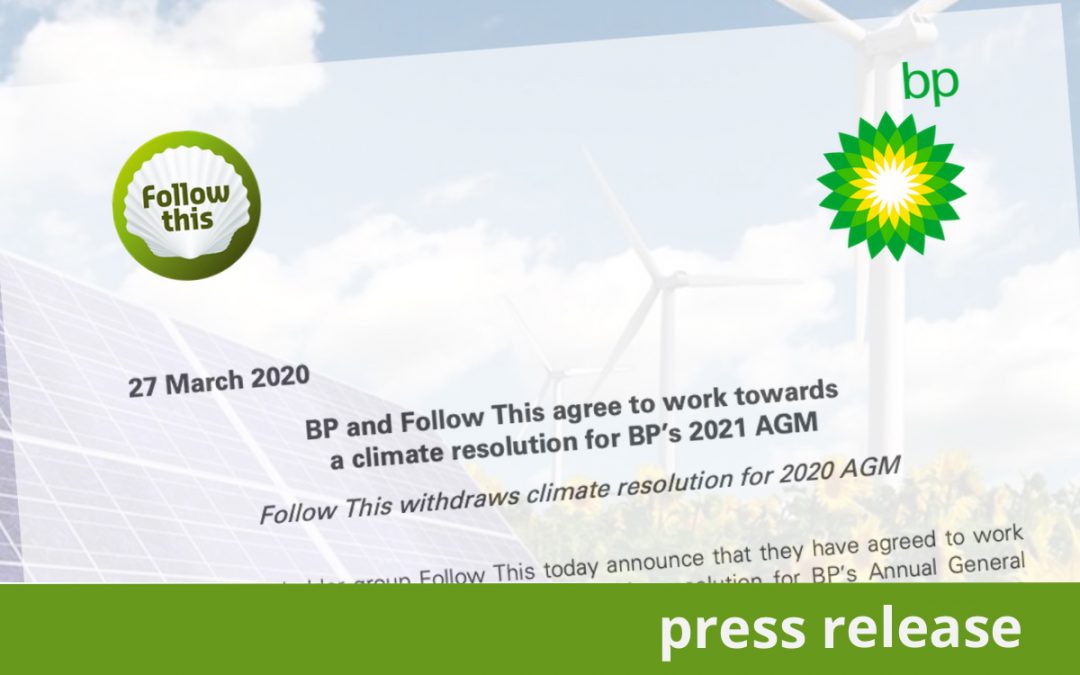 BP and Follow This have agreed to collaborate in drafting a climate resolution for 2021, they announced in a joint press release today.

The 2021 climate resolution will offer shareholders the opportunity to support BP’s net zero ambition and aims, including for Scope 1, 2, and 3 emissions, and for increasing the proportion of its investment that goes into non-oil and gas businesses, to meet the goals of the Paris Climate Agreement.

Follow This has decided to withdraw its climate resolution tabled for BP’s 2020 AGM in response to BP’s new climate ambition, this agreement, and to give BP time to set out more detail.

BP’s new climate ambition
Last month, BP’s new CEO, Bernard Looney, announced his ambition to reduce carbon emissions from BP’s own products (Scope 3) to net zero by 2050, the key ask of the Follow This resolution. The move represents a U-turn from comments made by the former CEO, Bob Dudley, who told investors that Scope 3 was not his problem.

Explaining his decision to adopt an ambition including Scope 3, Mr. Looney cited “Engagement with Follow This and their supporting investors have been immensely valuable.”

True test
“BP’s sudden green ambition has provoked a great deal of skepticism,” says Mark van Baal. “The new climate resolution will offer BP the opportunity to end the uncertainty and to secure shareholder support for investments in the energy transition in the decades to come. The new shareholder resolution will be a true test for BP and its investors.”

Mark van Baal, founder of Follow This, said: “We support BP’s goal to decrease the emissions from its own energy products (Scope 3) to net zero by 2050. Once implemented, this goal will require a radical shift in BP’s spending away from fossil fuels to renewables.

We thank the investors that voted for our climate resolution that encourage this step in 2019.

The oil industry can make or break the Paris Climate Agreement. We expect that the first oil major to rapidly scale the energy transition to renewables will be rewarded by shareholders and customers, and that other oil majors will follow.

To date, BP is the first oil major to acknowledge the imperative of shareholder support to drive the energy transition which the world urgently needs. We look forward to working on a shareholder resolution to jointly ask shareholders for a mandate for Paris-aligned goals and investments for the decades to come.”

About Corona, the fallen oil price, and oil majors’ responses to crises
“We hope that acting on these crises will not postpone action on the climate emergency. We also hope that these crises are a wake-up-call for oil and gas companies and their investors and that they now realize that they could be less dependent on the oil price by diversifying into renewables. With a broad renewables portfolio energy companies could be more resilient, and less dependent on decisions in countries like Russia and Saudi-Arabia.”

Shell and Equinor
The Follow This climate resolution remains on the agendas of Shell and Equinor, as these companies continue to need more shareholder pressure to align their targets with the Paris Climate Agreement, in particular their Scope 3 targets. Both companies aspire an emissions reduction by 2050 of approximately 30% in absolute terms (50% in relative terms). The Paris Climate Agreement, on the other hand, demands 70% (2°C) to 100% (1.5°C) by 2050 according to IPCC scenarios. In 2019, Follow This and a group of supporting Dutch investors gave Shell breathing space to align their targets with Paris, but this year the resolution is back on the agenda.