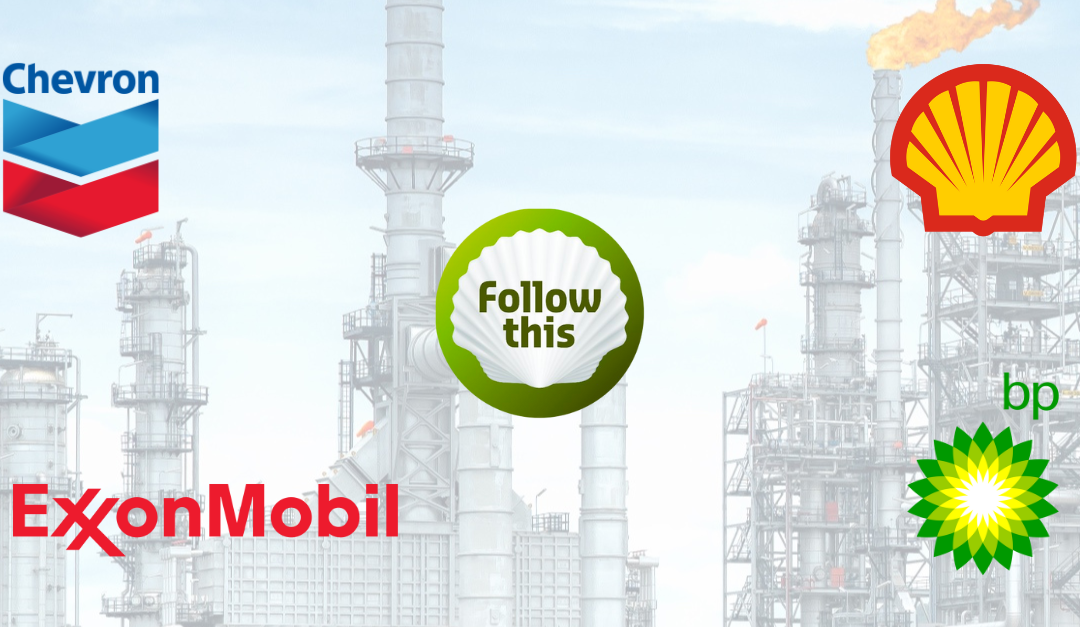 Leading investors with assets under management of more than € 1.3 trillion* join activist shareholder Follow This in filing climate resolutions at Shell, BP, ExxonMobil, and Chevron. The resolutions (attached) request the oil majors to align their 2030 emissions reduction targets with the Paris Climate Agreement.

“This new and significant commitment from some of the world’s most important investors takes our fight against climate breakdown to a new level,” says Mark van Baal founder of Follow This. “Our call for Paris-aligned targets has landed in the capital markets, in effect moving this crucial issue to centre stage for responsible institutional investors. We expect that more investors will follow their leading peers and vote for change at Big Oil.”

Two new fallacies
“Together with responsible investors, we have to counter Big Oil’s new fallacies. First, that the current energy crisis should eclipse the climate crisis, an argument that – helped by the windfall profits – spurred BlackRock to backtrack on Scope 3 in 2022 #. Second, that the problem is on the demand side**.”

Please read the attached climate resolutions first for all the compelling arguments for investors to vote (and rebuttals of Big Oil’s counter arguments about the climate crisis and demand side).

“We hope that investors will finally realize that Big Oil will hang on to fossil fuels as long as possible, unless they vote in a different direction. We’ve engaged with eleven oil majors since May, and they persist, with no exception, that the majority of their shareholders showed support for their current inadequate strategies by voting against the Follow This resolutions in May.”

Focus on Scope 3 by 2030 to prevent smokescreens
In 2023, we will narrow the resolutions to focus on Scope 3 by 2030, because large-scale reductions of emissions from fossil fuels in this critical decade are essential to avoid climate breakdown. As the IPCC has stated: “Without immediate and deep emissions reductions across all sectors, limiting global warming to 1.5°C is beyond reach.”

“The focus on Scope 3 by 2030 leaves the oil majors no wiggle room for smokescreens about ‘net zero emissions by 2050’ or reduction targets for operational emissions (Scope 1 and 2, around 5% of emissions).

Targets for 2050 have no consequences for medium-term strategies (see reference to legal disclaimer in the resolution for Shell). Despite ‘net zero by 2050’ targets, none of these four oil majors is even close to Paris-aligned emissions reductions plans for 2030.”

Regain momentum in voting pattern
In the period 2016 to 2021, voting patterns showed exponential growth (see graph below). In 2022, votes decreased after Big Oil managed to convince shareholders that the energy crisis (and accompanying windfall profits) should eclipse the climate crisis. Nonetheless, shareholder rebellions of 15% at BP, 20% at Shell, 28% at ExxonMobil and 33% at Chevron voted in favour of Paris-aligned targets.

“Only when voting regains momentum, oil majors will change. Otherwise, oil majors will continue to claim to have a vast majority of shareholders behind their current inadequate targets. Our campaigns have shown that only increasing investors’ votes compel oil majors to advance their targets.”

* for 2023, six investors in Europe and the US (managing € 1.3 trillion in total) have co-filed one or more of the four climate resolutions; four of them are Edmond de Rothschild Asset Management (EDRAM, France, managing € 75 billion, co-filed-Shell), Degroof Petercam Asset Management (DPAM, Belgium, € 51 billion, all resolutions), Achmea Investment Management (Netherlands, € 175 billion, ExxonMobil) and Arjuna Capital (US, $400 million, Chevron and ExxonMobil); the others will make public statements later.

** After increasing shareholder voted for the Follow This climate resolutions, Shell and BP reluctantly set Scope 3 targets for the distant future. After investors started insisting on 2030 Scope 3 targets (rather than accepting ‘net zero by 2050’ promises), Big Oil pushed responsibility back to the demand side.

With best regards on behalf of the Follow This team,