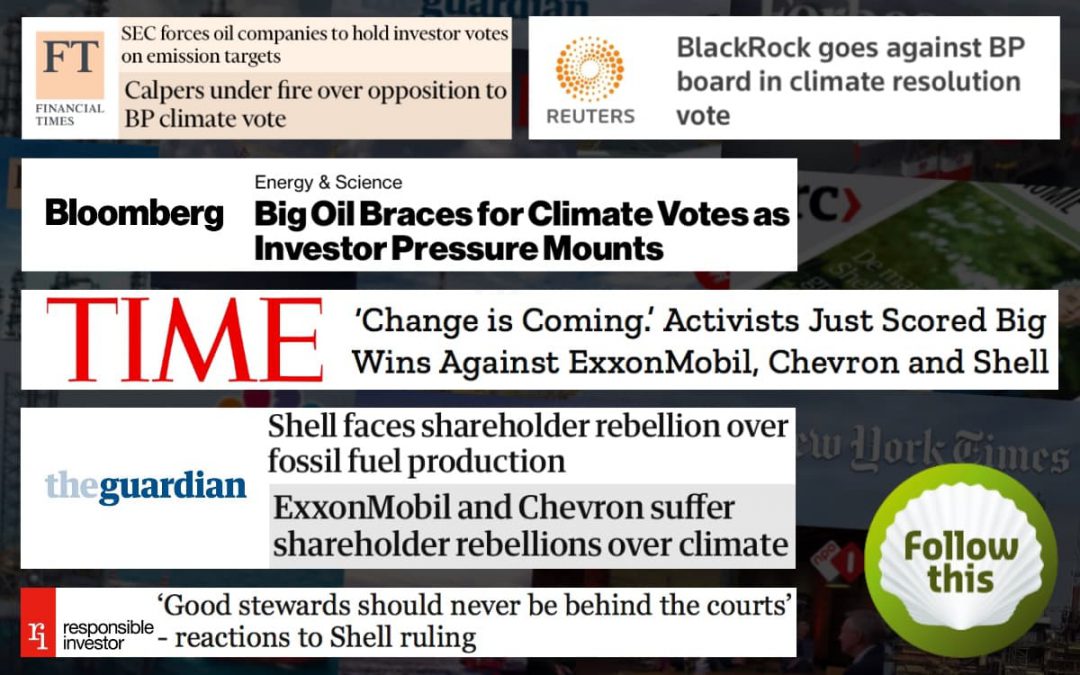 We hope that the events of May have left you feeling as optimistic as we do about our joint fight against climate change.

Many thanks to the investors who urged Big Oil to act now by engaging and voting for climate resolutions.

With the inauguration of Joe Biden, the tide has changed in the US: All Follow This climate resolutions passed the SEC in 2021, despite no-action letters by the oil majors. SEC forces oil companies to hold investor votes on emission targets, Myles McCormick reported in the Financial Times.

In the run-up to the AGM season, new momentum was building in support of climate resolutions. ‘As Europe’s oil majors prepare to host their annual shareholder meetings, one topic is garnering almost all the attention: Climate change looms large for Royal Dutch Shell Plc, BP Plc and Total SE, with investors at all three energy giants calling for greater action,’ predicted Laura Hurst on Bloomberg in Big Oil Braces for Climate Votes as Investor Pressure Mounts.

Simultaneously, investors who voted against climate resolutions were more exposed. As the chair of the Climate Action 100+ alliance of investors in the world’s most polluting companies, California’s state pension fund drew criticism after abandoning its activist stance, reported the Financial Times: Calpers under fire over opposition to BP climate vote (Billy Nauman, Attracta Mooney, and Anjli Raval). 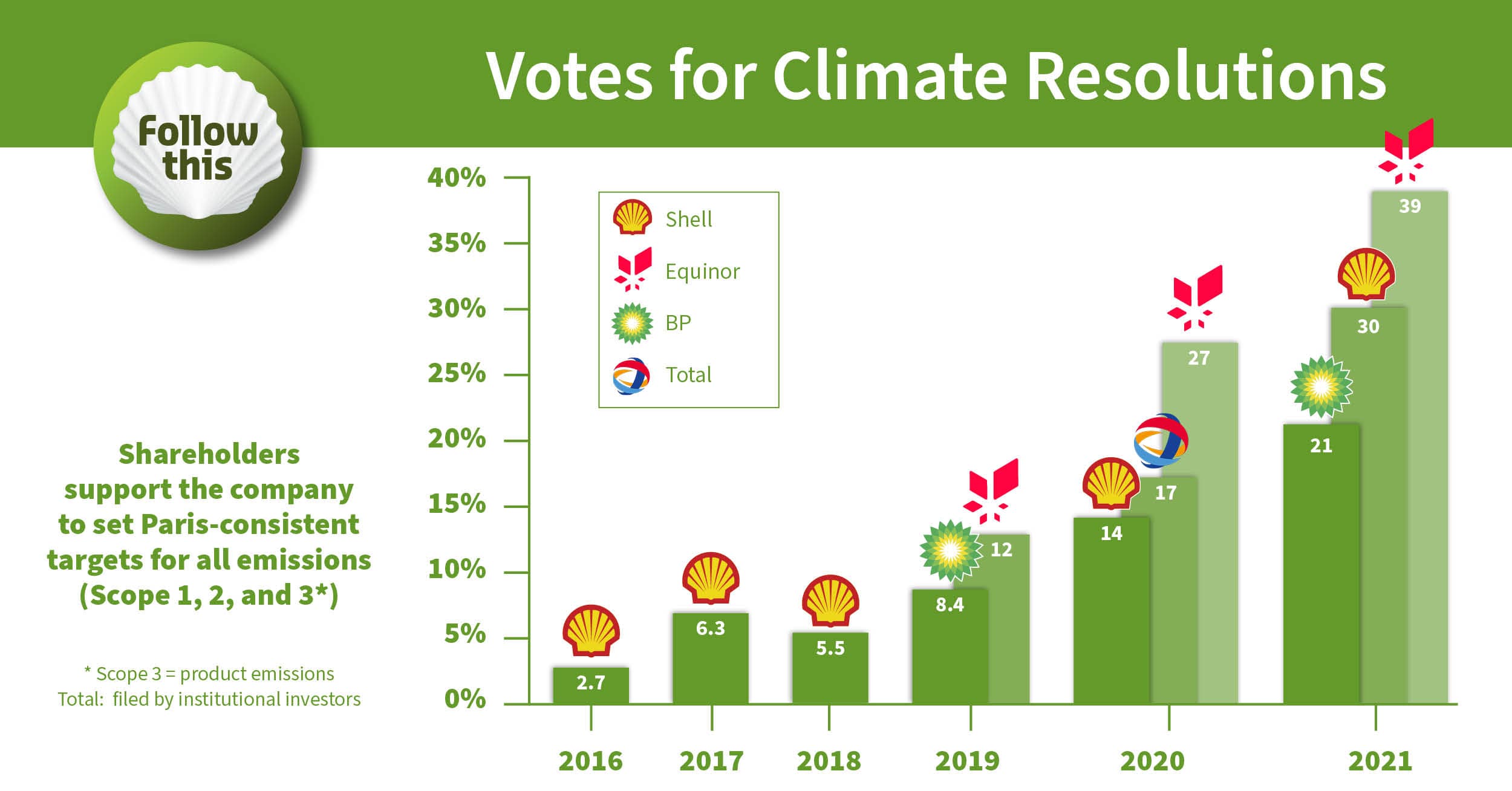 As a result, support in Europe for climate resolutions more than doubled at Shell and BP, despite the companies’ net zero by 2050 pledges. Follow This leads investor rebellions demanding reduced carbon emissions to tackle global heating, concluded Jasper Jolly in The Guardian.

The first in-house climate resolution, tabled by Anglo-Dutch oil major Shell, won 89% of votes, in line with management guidance. Nevertheless, the Follow This climate resolution won a record 30%, up from 3% in 2016, 6% in 2017 and 2018, and 14% in 2020. Shell faces shareholder rebellion over fossil fuel production, reported Jillian Ambrose in The Guardian. The Dutch Financieele Dagblad headlined a reconstruction of Shell’s AGM by Carel Grol ‘The Battle of the Van B.s’ (in Dutch). 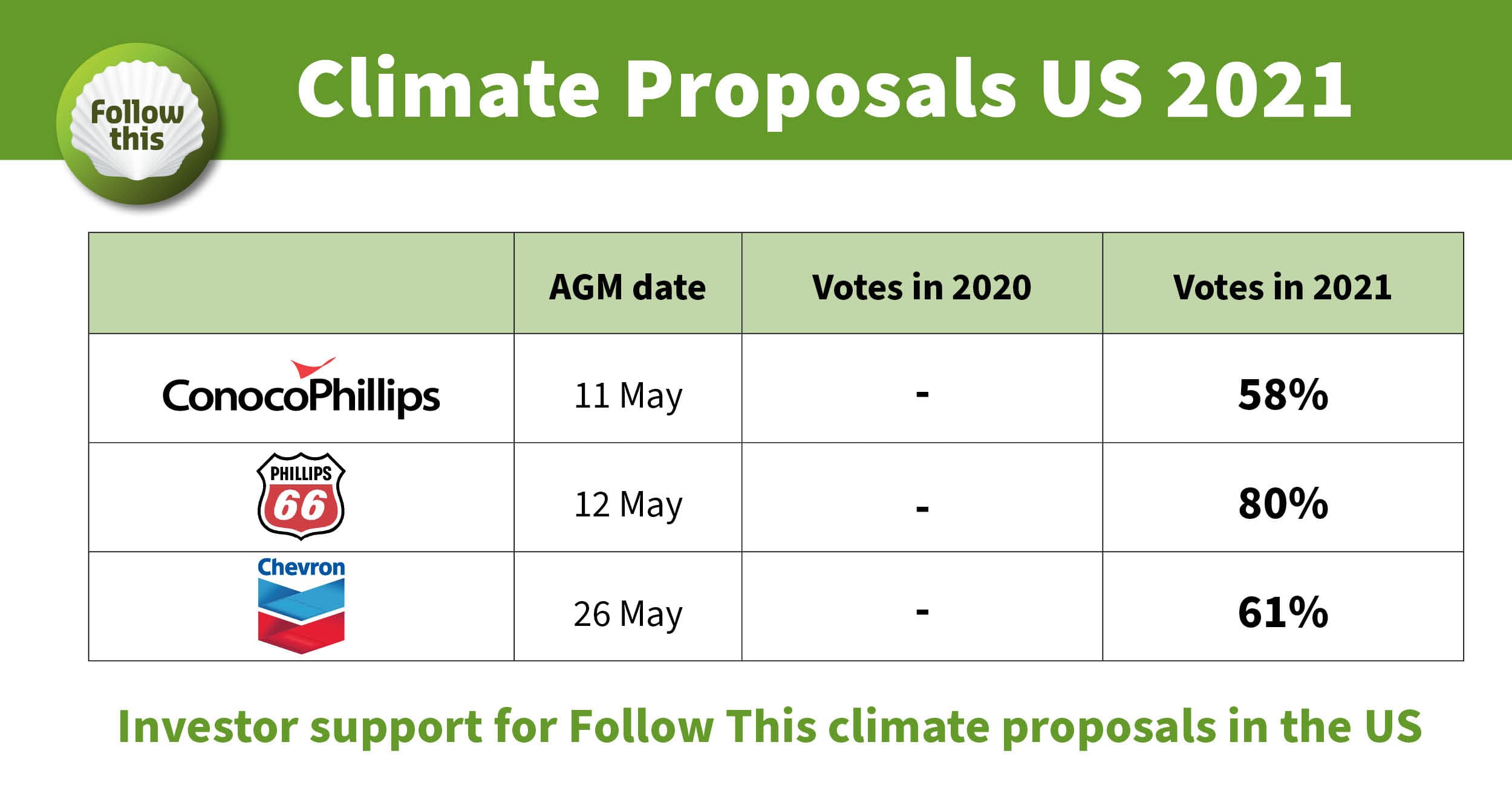 In the US, global investors overwhelmingly demanded emissions reductions: the Follow This climate resolutions, on the ballot for the first time, won three consecutive majorities, up to 80% at Phillips66. ExxonMobil and Chevron suffer shareholder rebellions over climate, observed Jillian Ambrose in the Guardian.

In deciding how to vote, investors could rely on the CA100+ Net-Zero Company Benchmark that showed that no oil major had Paris-consistent targets, and – as a result – none has Paris-consistent investments.

On top of investors’ pressure, a Dutch court ordered Shell to reduce emissions in line with the Paris Accord, the same fair ask as formulated in our climate resolutions.  ‘Good stewards should never be behind the courts’ was one of the responses collected by Gina Gambetta in Responsible Investor.

We therefore look back on the best AGM season ever in the fight against climate change: ‘These times can make history as the tipping point for oil companies,’ (Dutch) as NRC headlined an interview with Mark van Baal by Paul Luttikhuis.

‘Change is Coming.’ Activists Just Scored Big Wins Against ExxonMobil, Chevron and Shell, Justin Worland concluded in TIME, explaining: Mark van Baal, who founded Follow This, attributes the rise in shareholder interest in climate resolutions to a new way of thinking among investors. ‘The shift I’ve seen in the last five years is that investors don’t vote with the best interest of the company in mind, but with the best interest of their entire portfolio in mind,’ he says.

We again thank the investors that voted for climate resolutions, and we hope that next year more investors will conclude that engagement and voting are both crucial to compel oil majors to change course.

On behalf of the Follow This team and partners,

Behind Shell’s strategy to get into green energy