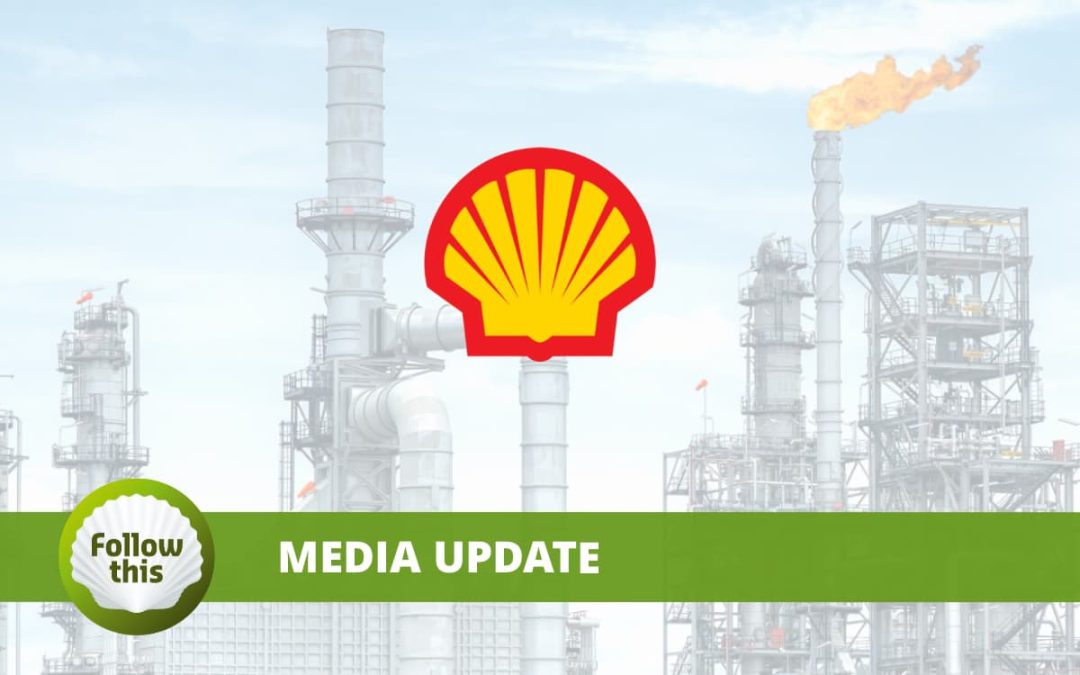 For the first time, Shell’s emissions are forecasted to decrease this decade (-5% by 2030; previous forecast was +4%), according to a new report by Global Climate Insights (GCI), an Australian research institute. Key drivers for the lower forecast are a lower COVID-19 rebound and divestments. 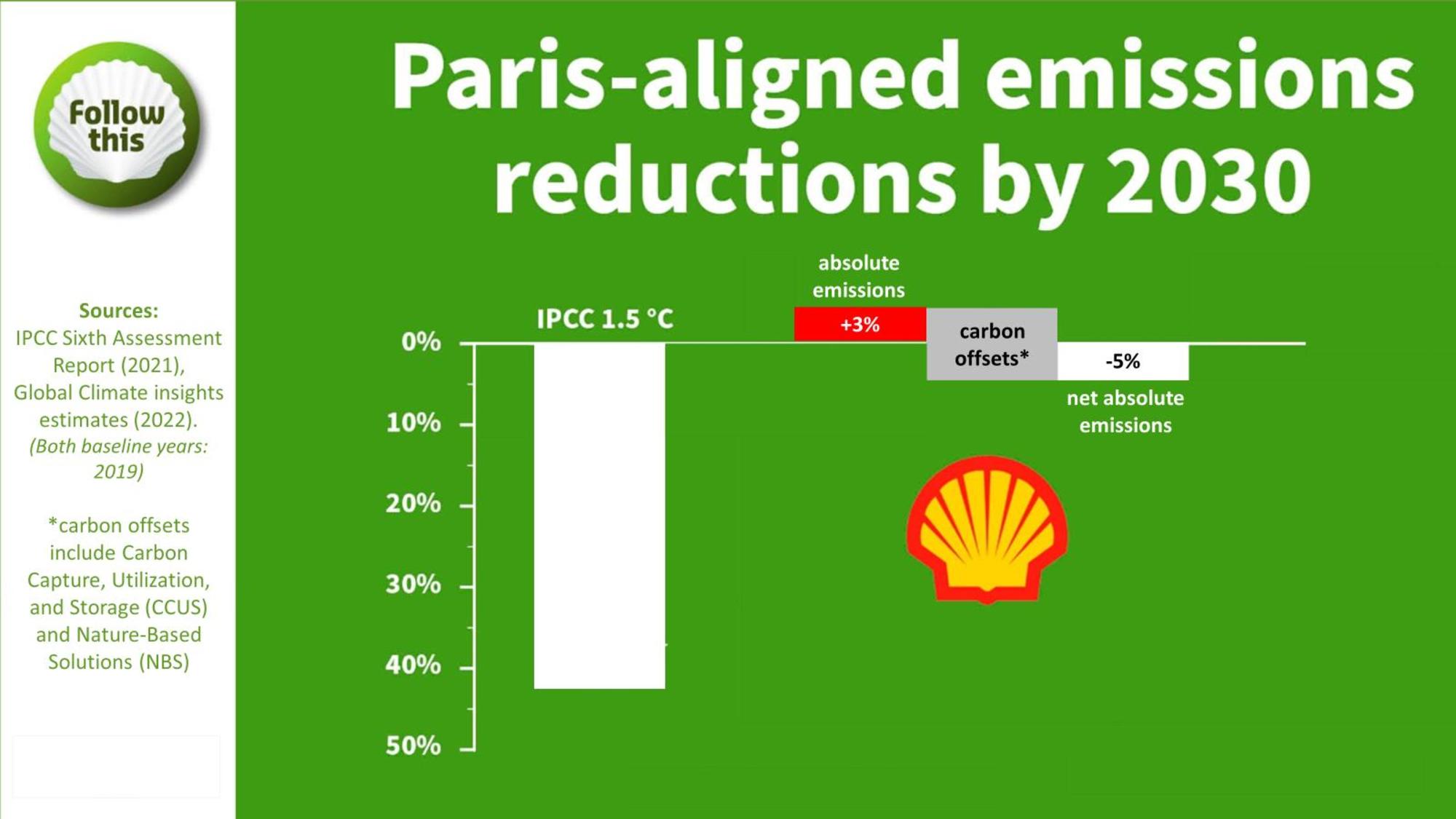 Second, the net absolute emission reduction will be reached through CO2 removal plans with Nature Based Solution (NBS, predominantly reforestation by planting trees) and not by a transition from fossil fuels to renewables. Shell ‘s gross absolute emissions without carbon offsets will still increase because of increased fossil fuel sales.

Response Follow This: “A Paris-aligned growth strategy can only be achieved by shifting investments from fossil fuels to renewables,” says Mark van Baal, founder of Follow This. “These two issues illustrate that.”

During the AGM, Shell didn’t answer Follow This’ question about absolute emissions by 2030 by stating that an “intensity targets is better”.

“Imagine how Shell could drive the energy transition if they put their brains and billions behind replacing fossil fuels with renewables.”

The GCI report shows that Shell’s carbon intensity target of -20% will only lead to -5% absolute emission reduction by 2030.

“This report shows that intensity targets are only meaningful if they lead to absolute emissions reductions.”

Shell’s strategy exemplifies the entire oil and gas sector
Shell’s medium-term strategy is emblematic of the entire oil industry: after shareholder pressure, many oil majors made promises for 2050 while growing their fossil fuels sales this decade. BP, for example, promises net zero by 2050, but stated: “We do expect the absolute level of emissions associated with our marketed products to grow out to 2030, even as the carbon intensity covered by Aim 3 falls” (BP strategy presentation). Chevron and ExxonMobil also intend to grow fossil fuel sales this decade.

No fossil fuel expansion within Paris Accord

According to GCI, the key drivers for the lower forecast for 2030 are lower oil and gas growth in 2021 and divestments of fossil fuel assets. The lower growth in 2021 is a result of lower COVID-19 rebound than previously assumed (p. 2). The forecasted reduction in emissions is not due to a change in Shell’s Powering Progress strategy; Shell’s emissions reduction target for 2030 remained unchanged.

Cutting emissions but not yet transitioning
The fuel and LNG outlook shows an expected increase in Shell’s fossil fuel business from 2022 to 2030. Oil production will decline, but in the meantime third-party oil sales will go up (p. 7 – 10).

Follow This: “To drive the energy transition, oil and gas companies should shift investments from fossil fuels to renewables instead of expanding their fossil fuel business. Investments in renewables could drive the rapid and significant emissions reductions the world needs to make this decade.”

Potential strength
GCI points out that Shell’s integrated model provides a potential strength to Shell in accelerating customer transition to low carbon. Nonetheless, the company is currently not focusing on customer decarbonization (p. 1) even though this is imperative in reaching the necessary emission reductions. Shell’s product emissions (Scope 3, e.g., emission of consumers using Shell’s energy products) contains around 95% of Shell’s total emissions (p. 16).

Follow This “We hope the new CEO Wael Sawan (per January 1), will advance Shell’s strategy. This would be the ideal time to show the world that Shell is taking meaningful action in the fight against the climate crisis.”

Carbon offsets
According to GCI, one of the key concerns with Shell’s strategy is their over-reliance on carbon offsets (p. 1).

The gross absolute greenhouse gas emissions, i.e., the total amount of emissions emitted into the atmosphere before carbon offsets (Carbon Capture, Utilization & Storage, CCUS and Nature Based Solutions, NBS), are still expected to increase by 3% by 2030 (p. 13)

The net absolute GHG emissions are only expected to decrease by 5% as a result of carbon offsets by CCUS (<10%) and (for >90%) Nature Based Solution (NBS, predominantly reforestation by planting trees, p. 3).

It is argued that the use of nature-based solutions should only be used to remove historic carbon from the air and counteract unavoidable emissions (Guardian, 26 January 2022), not for compensation for the burning of more fossil fuels.

“As an integrated oil and gas company, Shell is in an excellent position to decide on what strategy will be most effective to achieve the necessary emissions reductions by 2030. However, nature-based solutions on their own cannot confront the climate crisis. They are to be used in addition to a shift from fossil fuels to renewables.”

Real world emission reductions to increase by 20%
An additional strategy of Shell to reduce emissions is divestment. GCI points out that divested assets will continue to produce fossil fuels that emit GHG into the atmosphere. The approach simply shifts emission from one owner to the other.

UPDATE court verdict
According to the briefing Shell’s Fossil Fuel Production by Oil Change International (OCI), Shell has taken Final Investment Decisions (FIDs) to develop ten new oil and gas extraction assets since the court verdict in May 2021. According to the briefing, Shell’s fossil fuel extraction assets and potential expansion plans conflict with Shell’s obligation under the Dutch court verdict handed down in May 2021 to reduce its net CO2-emissions by 45% below 2019 levels by 2030.

FOOTNOTE: As shareholders we are business model and technology agnostic in terms of how companies are to reach the necessary emission reductions. Therefore, we focus on GCI’s estimate of Shell’s net absolute emissions (-5%), including Shell’s deployment of carbon offsets (CCUS and NDS). However, it should be noted that their current strategy will result in an increase of 20% in real-world emissions.