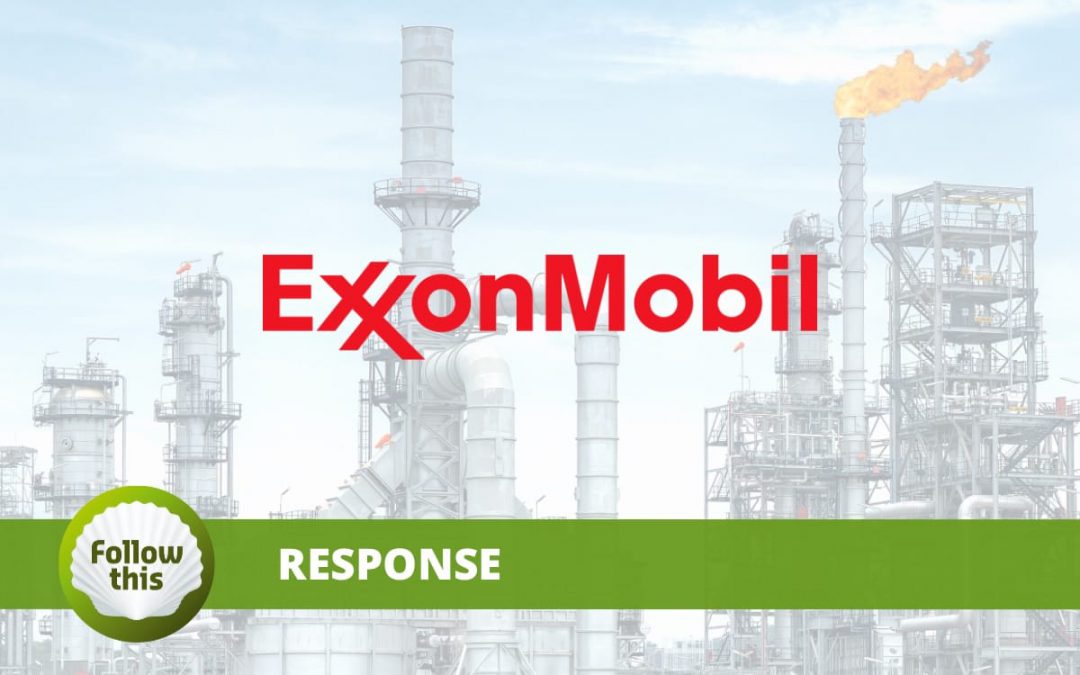 On January 18th, ExxonMobil announced its ambition for net zero emissions for operations (Scope 1 and 2) by 2050. In May, the Follow This climate resolution – requesting Paris-consistent reductions of all emissions (Scope 1, 2, and 3) – will come to vote at the AGM of Exxon (pending SEC decision *).

Net zero for operations by 2050 is mere tokenism and reflects no serious attempt to address investors’ concerns about the climate crisis. At the AGM in May, responsible investors can show ExxonMobil that all emissions have to decrease by voting in favor of the Follow This climate resolution.

To keep the Paris goal of limiting global warming to 1.5°C alive, more and more investors insist that all emissions have to be down by 45% by 2030, in particular product emissions (Scope 3), which accounts for 80-90% of the emissions of a typical oil major. With this goal, Exxon is like a tobacco producer that promises to reduce smoking while continuing cigarette production.

ExxonMobil CEO Darren Woods told the Financial Times that Exxon could expand its oil and gas production in the coming years and still meet the emissions reduction goals at its operations. His intention to expand oil and gas production shows that he has no intention to contribute to the goal of the Paris Accord, which calls for ‘immediate, rapid and large-scale reductions’.

The IPCC could not be more clear: ‘unless there are immediate, rapid and large-scale reductions in greenhouse gas emissions, limiting warming to close to 1.5°C or even 2°C will be beyond reach’ (IPCC Sixth Assessment Report Press Release, 9 August 2021).

* We expect that the SEC will allow the climate resolution at Exxon, like it did at Chevron, Conoco, and P66 in 2021. Exxon has yet to send a ‘no-action letter’.

“Absolute emissions have to go down strongly, 45%, that’s what Paris means”