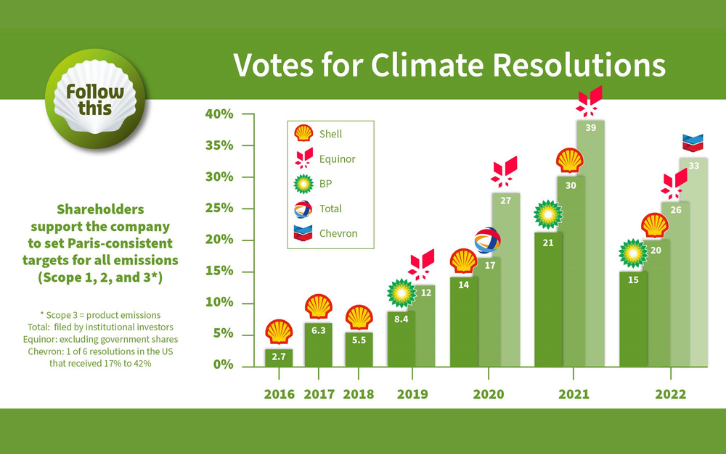 For investors in Big Oil, the fight against the climate crisis has lost momentum in 2022.

The recently updated CA100+ benchmarks confirm that no oil major is Paris-aligned; in spite of this, shareholder votes for Paris-consistent targets – the request of the nine climate resolutions in the graph below – decreased in 2022.

Oil majors can now claim to have the support of a majority of their shareholders to continue with their inadequate climate action for another year. For example, Shell CEO Ben van Beurden refused to commit to absolute emissions reductions by 2030.

Please find our provisional explanations for the decline in votes below.

Although votes did decrease, around one third of shareholders still joined together in a shareholder rebellion, urging companies to set Paris-consistent targets.

We thank the investors that voted for curbing emissions this decade. They are the true change agents in the fossil fuel industry, an industry that has proven to be change-averse for decades; Big Oil will make or break the Paris Accord.

Together, we must convince more shareholders that Big Oil will only change course when we unify our message and vote in favour of Paris-alignment.

We will conduct analyses of voting behaviour and voting rationale. Please do not hesitate to share your explanation(s) with us and extend this briefing to relevant colleagues in your network (or share via LinkedIn).

With best regards on behalf of Follow This, Mark van Baal 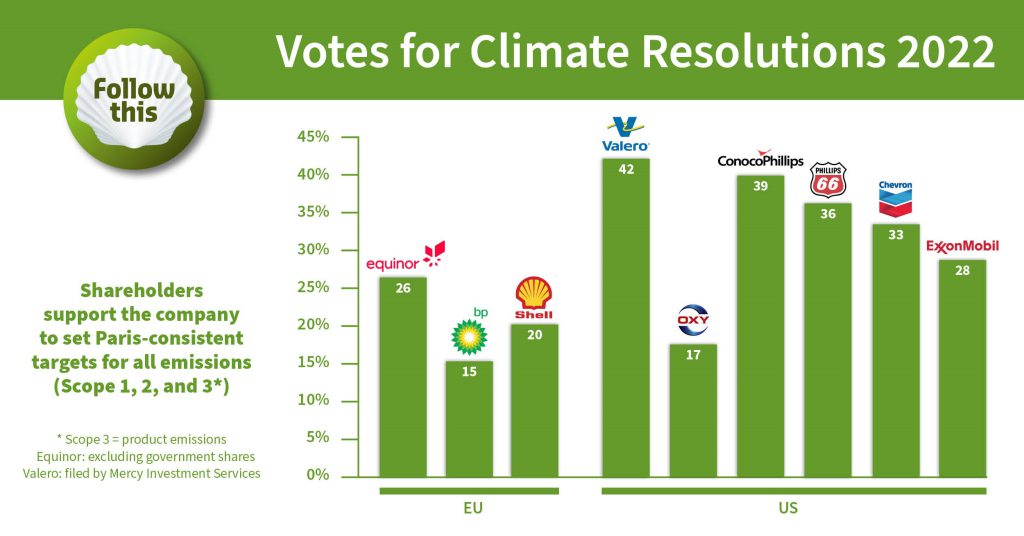 Our provisional explanation for the stagnation in votes:

In recent years, the number of investors who request science-based targets instead of settling for disclosure has consistently increased; this trend stalled in 2022. An analysis of voting behaviour in previous years showed two kind of voting rationales:

Group A has been growing exponentially in recent years; at Shell, votes increased from 6% in 2017 and 2018 to 14% in 2020 and 30% in 2021. The increase in votes occurred in spite of Shell’s yearly advancements of its ambitions or targets.

Our provisional explanations for the decline in votes:

BlackRock, the world’s largest money manager, explained in the Financial Times that Russia’s invasion of Ukraine had changed the environment; making them wary of proposals to oil majors which request targets for reducing emissions in their supply chains and of their customers.

Engine No.1 was convinced by ExxonMobil that Scope 3 targets are not reasonable: “We didn’t support proposals that asked these companies to set targets on Scope 3 emissions in the near term because oil and gas producers cannot be precise on Scope 3 reductions in the short-term (ie, setting targets) until the consumer companies are much more clear,” Engine No.1 explained to Responsible Investor.

In general, it looks like the energy crisis and the windfall profits resulting from Ukraine war have eclipsed the climate crisis. Both crises must be dealt with simultaneously by shifting investments to renewables. The current windfall profits from high oil prices should be used to make the enormous investments in renewables that are needed to address the climate crisis and reduce dependency on oil and gas fields which are impacted by geo-political conflict. The hardships of the current energy crisis will be dwarfed by the consequences of devastating climate change.

These voting results are a loss in the fight against the climate crisis. In May, everybody lost except for the boards of Big Oil, who will hang on to fossil fuels investments for another year and continue to fuel the climate crisis.

We will continue to research the underlying reasons for the decreased support for climate resolutions this year. To this end, we will engage with investors directly, and examine voting guidelines and rationales. Please do not hesitate to share your explanations for your votes with us.

Overview analyses in the media featuring the Follow This climate resolutions:

The Guardian: “We hope investors do not give in to the narrative from oil companies that the crisis created by the war in Ukraine overrides the climate crisis,” Follow This founder, Mark van Baal, said. (Alex Lawson)

Barron’s: “The votes signal investors’ impatience with Big Oil’s refusal to curb emissions by 2030,” said Mark van Baal, founder of Follow This about the 28% at Exxon and 33% at Chevron support for the climate proposal. (Avi Salzman)

S&P Global: Follow This, whose campaign has contributed to the record number of environmental shareholder resolutions up for votes in the 2022 proxy season, has suffered similar setbacks at other major oil and gas producers in Europe and North America this year. (Alex Blackburn) 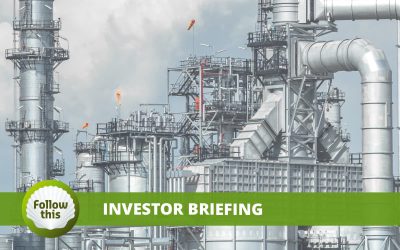 Invitation to file, co-file, or provide input for climate resolutions in 2023